Speaking at an expanded meeting of the board of the Russian Ministry of Defense on December 24th, 2019, Russian President Vladimir Putin once again recalled attempts to rewrite the history of World War II, which are being undertaken in Europe and overseas.

His words caused quite a stir in Poland.

“In some countries – our neighbors, in Europe and overseas, they often try to distort history, they come up with some incredible scenarios for the development of the situation in the world and in Europe before the outbreak of World War II,” the president said.

Speaking about the pre-war situation in Europe at the end of the 1930s, Putin recalled the views held by Polish politics back then.

“Hitler informed the Minister of Foreign Affairs, and then the Polish Ambassador to Germany, bluntly said that he had an idea to send Jews to Africa in the colony … for extinction, for extermination. To which the Polish ambassador answered him, and then wrote it in his paper to the Minister for Foreign Affairs of Poland, Mr. Beck: “When I heard this … I answered him,” he replied to the Führer, to Hitler, – if he does, we will place a magnificent monument in Warsaw for him,” Putin said.

“You bastard, anti-Semitic pig, couldn’t you say something else. He was in complete solidarity with Hitler in his anti-Jewish, anti-Semitic sentiment, moreover, for the mockery of the Jewish people he promised to erect a monument in Warsaw,” he said.

The diplomat in question is Józef Lipski, who served as ambassador in Berlin from 1934 to 1939.

In his September 20th, 1938 report sent to the Polish Foreign Minister, Jozef Beck, Lipski reported on the details of a two-hour meeting with Hitler and German Foreign Minister Ribbentrop on that day.

They mainly discussed the “Sudeten crisis,” but also touched on the “Jewish question,” about which Lipsky wrote as follows: “He [Hitler] was struck by the idea of ​​solving the Jewish problem by emigrating to the colony in accordance with Poland, Hungary, and maybe Romania (here I replied that if this finds permission, we will erect a beautiful monument of him in Warsaw …). ”

This document is not a secret – back in 1981 it was published in the USSR in the collection “Documents and materials on the eve of World War II 1937-1939”, published by the publishing house Politizdat.

A native of the German Empire and a graduate of the University of Lausanne, Lipsky began working at the Polish Foreign Ministry in 1925.

The diplomat was a supporter of rapprochement with Germany and in 1934 became one of the developers of the “Declaration on the non-use of force between Germany and Poland”, also known as the “Pilsudski-Hitler Pact.”

In response, the Polish authorities protested the “historical insinuations” made by Vladimir Putin by summoning Russian ambassador to Warsaw, Sergey Andreyev.

Warsaw and Moscow have been in a spat about the 1939 non-aggression pact between Nazi Germany and the Soviet Union for months now.

“[W]e are ready to explain to Russian diplomats historical facts for as long as it will take for them to understand that the world will never forget the true meaning of the Ribbentrop-Molotov Pact,” Polish Vice-minister of Foreign Affairs, Marcin Przydacz, said on Twitter.

In response to Amb.Andreyev, just one commentary:we are ready to explain to Russian diplomats historical facts as long as it will take for them to understand that the World will never forget the true meaning of the Ribbentrop- Molotov Pact and the Soviet-Nazi 1939 parade in Brest 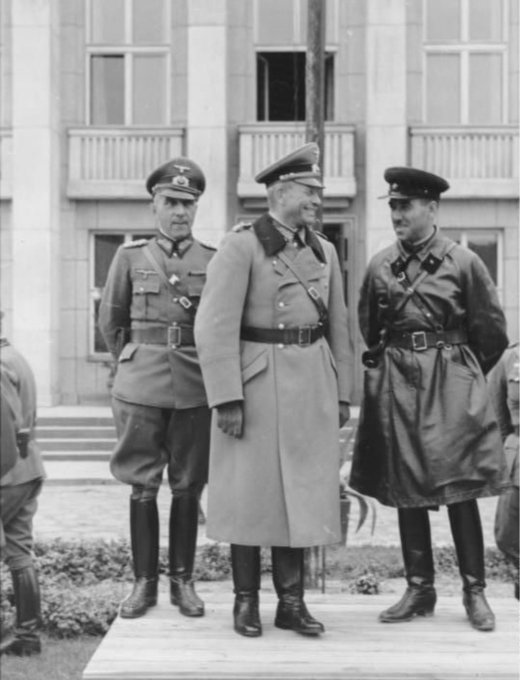 144 people are talking about this

The Polish Foreign Ministry had already issued a statement stressing that Poland, which had regained its independence in 1918, was forced to pursue a policy of balance with Germany and the USSR. That is why non-aggression treaties were signed in 1932 with Moscow and in 1934 with Berlin. However, the USSR took actions “directly aimed at causing war,” the statement stressed. Despite this, the Polsih side somehow forgot that Poland alongside with the Nazi Germany particiapted in the partition of Czechoslovakia.

The head of Russian parliament, Vyacheslav Volodin, also angered Warsaw by saying that Polish authorities at the time “practically showed solidarity… with fascist Germany,” and that the current Polish government should apologize for it.

The Russian envoy has already stirred controversy in Poland — in 2015, he said that Warsaw “bears partial responsibility” for the events in 1939.

MORE ON THE TOPIC: